Let’s Have a Potty Party! 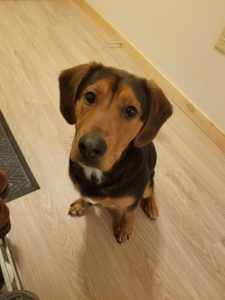 Potty Training can be hard!

When first looking for a puppy you probably heard people say that having a puppy is a lot of work!

My husband and I were looking for a puppy for quite some time before we found Tucker, but we just never pulled the trigger for some reason.  The first night we brought Tucker home, I figured out what that reason was for me…potty training!

That first night I swear Tucker urinated on every inch of our carpet in the dining and living rooms. Now, this could have been a mix of multiple things like marking his territory in his new home or nerves/stress, but the fact that he came with no potty-training experience didn’t help his case.

If you don’t have this scenario, you are very lucky! But if you do, please read on for good tips and tricks that worked for Tucker and me.

Housetraining can be relatively easy, but you do need to be able to pay attention to detail, be consistent, and be patient. I will warn you, that depending on the breed housetraining can take months.
But don’t worry, it will get better I can promise you that! There was a time I never thought Tucker would be potty trained, but we finally got him on the right track! 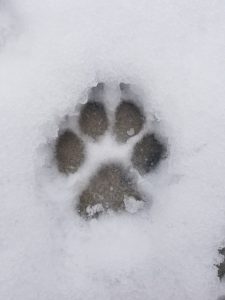 The most important things that will help you achieve proper housetraining are:

1. Your pup should be under constant supervision while inside.

2. Pay attention when you are outside with your puppy and use positive reinforcement when he/she urinates or defecates.

3. Keep your pup crated while you are away.

4. Try to keep your pup on a schedule.

It is important to always have an eye on your puppy while he/she is running around in your house. This allows you to quickly put on a leash or scoop ‘em up if he/she begins to urinate or defecate in the house, or hopefully, if you catch them showing the subtle signs (sniffing, wandering, squatting, etc). If your
puppy does start to urinate, startle him/her with a loud sound to hopefully stop the action so you have
time to quickly take him/her outside to finish. I found that quick loud claps worked well for Tucker instead of shouting.

What should you do if you find an accident, but didn’t see your pup do it?

My parents told me, and maybe other people have heard this too, that you were supposed to rub your puppy’s nose in
it.  Please don’t do this, don’t yell at him/her, or punish your pup in anyway. It won’t help.

It is possible you noticed this accident long after it happened, and your pup won’t realize you are yelling at them for that mistake instead of for something he/she just did. The best thing to do is just put them away (crate or
puppy-proofed room) and clean it up, even possibly take him outside. 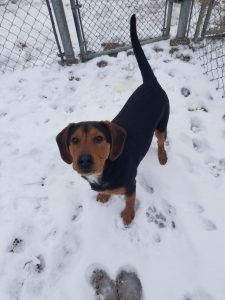 Let’s Have a Potty Party!

When you are outside with your puppy, take them to a designated area that you will be going to most frequently. The hope is that the more you go there to allow the puppy to eliminate, the more likely he/she will know what to do once they reach this spot. As soon as your puppy is done, immediately praise him/her and give a very tasty treat!

Eventually, if your pup is anything like Tucker, as soon as he/she is done eliminating, they will come straight to you for a treat!

Another helpful tip with housetraining is crating your dog.

In a future post, we can talk specifically about crate training. Crating works great because puppies do not want to eliminate where they sleep or eat, so they are less likely to eliminate in their crate. Usually, when a puppy is in their crate it is because the owner is gone for a few hours or they are sleeping, which means they have to learn to hold their bladder for that period of time. Once the puppy learns how to hold their bladder in the crate, they are more
likely to hold their bladder outside of the crate. Crate training was imperative for Tucker’s potty training!
Because I took him to work with me, he had to stay in the kennel for most of the day as he was too
young for daycare. I noted that every few weeks Tucker could go longer and longer without needing
potty breaks both in and out of the crate.

The last important tip is to get your puppy on a schedule and to know important times to take them
outside. I recommend taking your puppy outside to eliminate after every meal, and even after every
large water consumption. This is because the consumption and digestive process stimulate urination
and defecation, and water moves through a puppy extremely fast. Other times that I recommend taking
your puppy out are when they just woke up from sleep or a nap, or after your pup gets distracted and
stops a long play session. Many times, your puppy won’t realize he/she has to go until it is too late
because they were too busy playing. Finally, I recommend letting your puppy out about every 30-60
minutes when they are very young until they are comfortable going longer. It’s better to take them out
too often and avoid mistakes inside and work towards extending the time between breaks. Puppies may not
develop full bladder control until they are 5 months of age, or possibly longer, depending on the breed
or previous training.

As I said before, stick with the training and the praising! I understand what you are going through and
know it can be frustrating, but I promise you if Tucker can become housetrained then your pup can too! 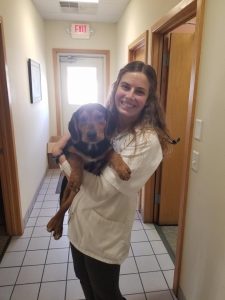